Grand New Party: How Republicans Can Win the Working Class and Save the American Dream by Ross Douthat 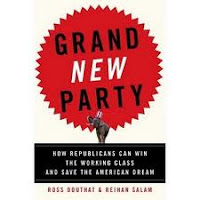 This book was a pleasure to read. In an era in which U.S. conservatives have gone insane -- with the tea baggers and Sarah Palin and Glenn Beck -- it's good to know that there are some people on the U.S.-right who have not gone off the cliff.

I didn't agree with many parts of this book, but I would nevertheless recommend it. For in this age of political loons, it is refreshing to read a conservative viewpoint that engages in rational debate instead of hysterical screams.

The Age of Abundance: How Prosperity Transformed America's Politics and Culture by Brink Lindsey

This book is an interesting take on the culture wars in the United States. Written from a libertarian perspective, it argues that political debate in the U.S. is dominated by two ideological minorities. On the left, there is a liberal class that promotes the cultural and sociological fruits of capitalism (e.g. cultural experimentation; an increasing capacity to pursue intellectual and scientific pursuits), while criticizing the very economic system that makes these fruits possible. Meanwhile, on the right, there are political partisans who recoil at the cultural opportunities created by capitalism, while defending the economic system that gives rise to these opportunities.

The thesis of the book is that these two extremes are vocal but minority groups. The majority – the libertarian center – comprises people who are more socially permissive than those on the right, but who also believe in free markets and the capitalist structure, which puts them at odds with many on the left.

I found this thoughtful book to be very enjoyable and would recommend it to anyone interested in U.S. politics. If I were to have one critique, however, is that it fails to describe in any great detail the so-called libertarian center. Though we hear a lot about hippies on the left and the religious-right, there is relatively little discussion of the center. The resulting effect is akin to a good comedian who forgets to say the punchline.

The Inheritance: The World Obama Confronts and the Challenges to American Power by David E. Sanger

An excellent (and frightening) discussion on the major geopolitical problems facing President Obama. From Iran, to North Korea, to Afghanistan and Pakistan, this book should be read by anyone who is interested in learning about the most dangerous foreign policy threats facing the U.S. at this time.

I was disappointed in this book. As a regular viewer of MSNBC, I have became a fan of Morning Joe, finding it to be the most interesting and intelligent show on the network. And even though I often disagree with Joe Scarborough's politics, I have come to respect his willingness to discuss politics with people from various points of view.

This book, however, is a lot weaker than his TV show. It is also a lot less bold than it pretends to be. It is true that this book questions some political orthodoxies on the right -- a rare thing for a Republican these days. At the same time, however, I found this book to be filled with many cliche conservative arguments, rather than innovative thinking.

A heartbreaking novel that is the work of a literary master. In this short book, Philip Roth describes an anonymous character -- a true "everyman" -- who reflects on his long life. Whether it is his failed marriages, estranged sons, beloved daughter who has forgiven him, or his body that is slowly decaying with age, as the inevitability of death looms over him, Roth has created a character that is flawed in an all-too human way. Roth's empathetic pen, however, allows the reader to connect to the main character in a very deep way, as if this unnamed man represented a part in all of us. A wonderful book that is a true masterpiece.