The Learners by Chipp Kidd 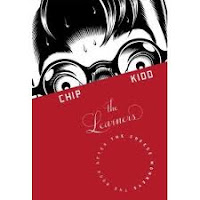 It's the summer of 1961 and Happy (who just graduated from college) is looking for work as a graphics designer. Inspired by one of his professors, Happy seeks out an ad firm in New Haven, Connecticut, where his professor used to work many years ago. Determined to make a name for himself, Happy works hard in order to impress his co-workers, who are an eclectic (and eccentric) group of characters.

After meeting an old college friend by chance, however, his life is turned upside down. Things then take a turn for the worse when Happy participates in an experiment at the Department of Psychology at Yale University. Shocked by the results of the experiment, Happy is forced to reexamine his life, while pondering the limits of human cruelty.

This clever novel is filled with wit and insightful writing. I so thoroughly enjoyed this book that I found it difficult to put down; in fact, some passages are right down brilliant. That being said, if one insists on being a critic, one could point to minor "flaws" in the book (for example, the ending came across as a bit forced). Overall, however, this is a great story and well worth the read.